Its earliness, beauty and topline are remarkable 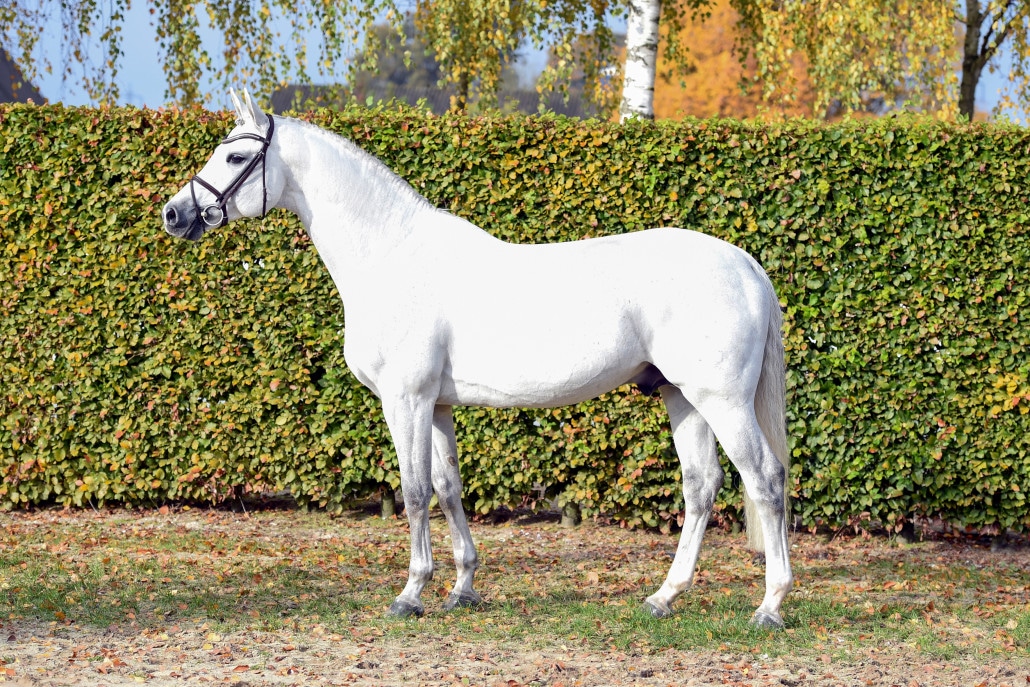 At only 9 years old, in 2016, he won the most prestigious event in the world: The AIX LA CHAPELLE Grand Prix. Ten months later, he won at SPRUCE MEADOW, the most endowed Grand Prix in the world. Total winnings: €1.200.000 at 10 years with Philipp Weishaupt.

At the end of 2020, after two years of the most attentive care, a return to the same level of performance is no longer possible for its owner Ludger Beerbaum. This is all the more damaging as Convall's osteoarticular status is impeccable and that he therefore gave hope for a long and fantastic sports career.

During the holidays, Ludger decides to entrust Convall to Sébastien Neyrat's team:

« For us, it was a real surprise. We didn't think the stallion could leave Riesenbeck. A beautiful Christmas present and a great proof of confidence from Ludger!

We will do everything we can for the comfort of the horse and to supply quality semen to all of Europe. Regarding his genetic interest, it goes without saying: He is more than an exceptional jumper. Philipp also says that he had with him sensations that he has never felt with any other horse. It is through such extremely rare exceptions that genetic progress passes, the history of high-level breeding has proven it for three decades. Convall is remarkably well drawn, very athletic, energetic and super-kind.

Strong and innovative, makes it very easy to cross. Colman is the sire of Robert Whitaker's stallion CATWALK IV with whom he won the Lausanne GP or the CSIO in Rôme, He is also the sire of the powerful CON DIOS III that we know in France under the saddle of René Lopez.

The Grand Prix d'Aix la Chapelle, the most prestigious event in the world, is not won by chance; otherwise it wouldn't be the Aix la Chapelle Grand Prix. Convall won it in 2016 at the age of 9: an exceptional precocity confirmed by his other classifications that year at the Calgary, Mannheim and Munster Grands-Prix. He expressed all his strength, his will and his perfect technique.

Young, Convall is classified many times and wins the Holstein championship for 6 years old then collects plates and waves with Christina Liebherr for Switzerland on the Youngster Tour circuit in CSI.
Colman is one of the six best aged sires of horses in 2016.
His best-known products are Passion Champion of Germany, Cooper (R. Tebbel), Catwalk (R. Withaker). Convall's dam also donated Cartino (Class S). His father Cascavelle is also the father of Carinjo (P. Delaveau). The grand dam of Convall by the Thoroughbred Sacramento Song gave Fantasia (M. Michael-Beerbaum), Carlot (R. Pessoa).
The 4294 Holstein family from which Convall comes has a large number of CSI winners as well as many stallions.

Convall, essence of the future, will start its first breeding season
in 2017.

Convall is a compact horse with a very beautiful neck extension and a splendid head, his covering capacity is undoubtedly what made him such a sure, young athlete.

To be crossed with mares which may lack roundness, look or power in the hock